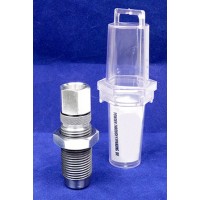 The Lee Precision 32 S&W (Smith & Wesson) Long Powder Through Expanding Die has an expanded and fla..

You processed my order, shipped it and I received it before I was expecting it. I was expecting it in 7 days. I believe I got it in 5. It might have been sooner than that. Anyway my Load Master was up and running the next day...

My order was not in stock, but as soon as it was, it was quickly shipped. Their followup is outstanding on pre-orders; when they get it in stock, they ship immediately. Their prices are hard to beat, too...

Jon, Much obliged for the response. By knowing where to look I can see wear on the fulcrum of the swivel actuator. I did try the “fix” of adjusting the powder die closer to the shell holder and lo and behold it was effective; not totally but effective. I have, however, adj..

With the war starting, horses were the main source of transportation, and horseflesh was going at a premium price. The Union was paying up to $178.00 per head.  The Confederates object was: Why buy horses when you can steal them?

One officer rode ahead surveying the area. Charles called to Juan, Get me a white cloth and a long stick, I will parlay with them.  But, I don t want them to see our fortifications.  One lone rider in uniform walked his horse slowly out in front, while his main force stayed behind him out of firing distance ..   The man narrowed his eyes and said, We have come for your horses!

The Captain s face blanched and then his face turned an ugly red as he struggled to speak with Charles. The Captain s hand slowly dropped down towards his gun and Charles added.   Captain, if you touch your gun, you will be dead before you hit the ground.

This is the third volume of the Jacob Series.   Cookie, who refused to bathe was dumped in the water trough and thoroughly scrubbed by the ranch women.  A gentlemen s class was held for the hired hands, and Cookie not only becomes a gentleman, but a culinary chef. To complete his transformation, he is now known as Charles.   Charles is now ready to leave the ranch and find himself a wife.

Are you ready to leave? asked Jacob, Yes sir, I m ready and I am looking forward to finding me a good wife. Well, replied Zac, Make sure you get a good one like Elizabeth and not one like Mary. Jacob cut in, No, you want a young woman, like Mary, and not an old one like Elizabeth. Charles laughed and was grateful for the light banter between these two good men. He hoped he could find friends as true as they were to each other.

In Cookie s journey to California in search for a wife, he finds there is a higher power that is directing his path in life. In Southern California he finds a young man stripped of everything but his underclothing.  He has been beaten, robbed and severely wounded and left for dead.  As Charles cares for the boy, he is reminded that the boys situation directly relates to the story in the Bible of the Prodigal s Son.   By Charles act of kindness in helping the boy reunite with his parents, he meets the young boy s beautiful sister, and Charles realizes it is no coincidence.