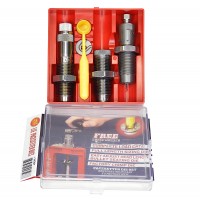 FS Reloading has everything LEE NUFF SAID & Now FS is carrying FA & some other brands I will buy from FS from now on ..

It is impossible to buckle the case with a Lee Precision Factory Crimp die as can happen with regular roll crimp dies. Tests demonstrate that even bullets which have no cannelure will shoot more accurately if crimped in place with the Lee Precision Factory Crimp Die. And a firm crimp doesn't increase maximum pressure for most rifles. In some cases, it may even reduce maximum pressure by smoothing the pressure curve.

Speer advises that Speer Bullets should not be used with certain Lee Dies. All other brands work great!