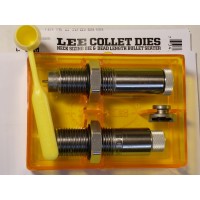 There is no loading system that will load more accurate ammunition than the Lee Precision 7.5x55 Sw..

i have been ordering a lot off this site and im very very happy with all there prodects and the staff of fs has done a very very nice job on geting all my orders right out in a timely matter and when you talk to them on the phone they are very conserned and besnes people keep up..

My apology for airing my concern here on the guest book. I cant send my email to your comany because your server doesn't accept the correct zip code that i input. Anyway, was just asking if i can order online, pay via mastercard, and havethe items shipped to my country, the Ph..

you just cant beat Lee equipment, from the first time users to the advanced loader, the pricing is GREAT as well as the staff, thank you all , and very nice to meet all you fine folks Joel Galloway... 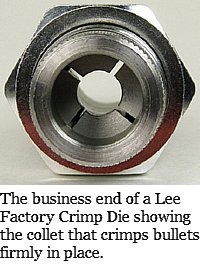 It is impossible to buckle the case with a Lee Precision Factory Crimp die as can happen with regular roll crimp dies. Tests demonstrate that even bullets which have no cannelure will shoot more accurately if crimped in place with the Lee Precision Factory Crimp Die. And a firm crimp doesn't increase maximum pressure for most rifles. In some cases, it may even reduce maximum pressure by smoothing the pressure curve.

Lee Factory Crimp dies generally use about .050" of the case to apply the crimp so any difference in the trim length between the cartridges comes off that amount. FS Reloading reccomends not interchanging calibers unless the bullet diamter and trim length match exactly.

Following are a few examples:

Cartridge specifications shown above are for illustrations purposes only. Refer to a competent reloading manual like Lee Precision Modern Reloading 2nd Edition or Hornady Handbook of Cartridge Reloading Tenth Edition before loading any cartridge. Refer to the SAAMI Cartridge and Chamber Drawings for actual cartridge standards.

Speer advises that Speer Bullets should not be used with certain Lee Dies. All other brands work great!